The carcass of a bottlenose dolphin was removed from Ocean Beach Monday after officials received reports that a dolphin and a seal were found washed ashore.

A team from the National Park Service, Marine Mammal Center and California Academy of Sciences responded to find the carcasses of a bottlenose dolphin and an elephant seal.

Researchers loaded the 755-pound dolphin carcass onto a truck for transport to Sausalito, where a necropsy will be conducted to determine the age and condition of the dolphin, as well as a cause of death. Samples were also collected from the elephant seal for analysis.

This is the 12th dolphin the Marine Mammal Center has responded to in its 40-year history.

The public is asked to report sick and injured marine mammals to The Marine Mammal Center by calling 415-289-SEAL (7325). A safe distance of at least 50 feet should be maintained from marine mammals, and dogs should be kept away from dead or dying animals. 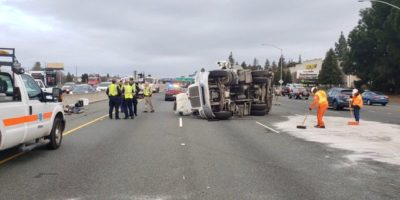 An undocumented immigrant accused of fatally shooting a woman at a San Francisco pier had his bail set at $5...