There were two inaugurations on Friday, one in Washington that started a new era under President Trump, and another in San Francisco which signaled that resistance to his policies are ramping up.

On wet streets under light and sporadic rain about a thousand people gathered in UN Plaza at 5 p.m. to rally and then march against the new president.

About a thousand people marched through San Francisco on Friday night in a peaceful protest against new U.S. President Donald Trump on Friday, January 20, 2017.

Gloria La Riva, 62, of San Francisco, who ran for US president twice, in 2008 and 2016, as the candidate of the Party for Socialism and Liberation, told the crowd:

Former San Francisco District 11 Supervisor John Avalos, who was termed out this year, was asked why he came out in the rain to march against President Trump:

“With Donald Trump’s inauguration and ascendancy to power the whole economic system has been laid completely bare. … He’s put people in charge who are only there to enrich themselves and their cronies, the rich. The only way to respond is to take the streets and make our voices heard and organize. That’s the first step.”

Avalos was asked if Americans shouldn’t give President Trump a chance first, as he only came into office that same day, and unite behind him:

“He’s the president of the United States. … He’s got his chance. He’s already showing, by putting his alligators in his own swamp, that he’s totally taking the country in the wrong direction.”

These women shouted and banged a spoon on a pot while looking out a window on Market Street, to show their support for anti-Trump demonstrators Friday, January 20, 2017.

As they marched, many chanted slogans like “Trump says get back, we say fight back” and “when Muslims are under attack, what do we do? Stand up, fight back!” along with “no Trump! No KKK! No racist, U.S.A.!”

Ron Chornow, 56, of San Francisco, said one of the issues he was concerned with was the “privatization” of the prison system:

When it was pointed out to him that slavery is generally defined as an individual legally owning another individual, he expanded that definition:

Leading the march for much of the demonstration was Frank Lara of the organization the ANSWER coalition.

Lara told the crowd over a microphone and loudspeakers:

“It’s nice to have this big idea as to how we’re going to change the system. … But as soon as you set foot in trying to resist it, you see what’s against you. You know the Bernie Sanders movement — which was a great movement that started questioning, he said ‘democratic socialist,’ finally the word ‘socialist’ — is coming out in the heart of the empire. People have seemed so afraid of what it is. But why is it that we demand health care for all? Why is it that we demand housing for all? They got their their own system. They benefit.”

“When the bank bailout happened — almost ten trillion dollars, that’s the bank bailout — when the three-page statement was handed over to banks, that was the collective wealth of people. That could have gone back to your pockets, all people, to benefit their housing, their healthcare. But it went to the rich and made them richer. … And people now like Trump — who are also a part of the establishment, who are also wealthy — now he’s handing out even more, saying this is going to benefit the American worker. Why? Because it’s built on racism; it’s built on sexism; it’s built on homophobia. And that, somehow, is supposed to win us over.” 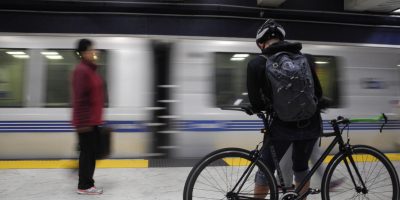