San Jose State University’s Student Homeless Alliance called on President Mary Papazian Tuesday to become involved with the university’s housing crisis and include them in her efforts.

Group founder Gigi Bellanos called the demands “very simple” and said that the coalition of students is looking for these things in order to set up a sanctioned village on campus for students and staff facing homelessness.

According to Bellanos’ group, there are an estimated 300 students that are homeless at San Jose State. That doesn’t even begin to cover faculty members who face these conditions.

The student group said in a statement:

“SHA would like to see SJSU develop an immediate solution to this problem, which might include free housing on campus, a sanctioned legal encampment on SJSU property and the de-stigmatization/decriminalization of houseless individuals.”

About 50 people showed up to the event, including one full class, Bellanos said. The SHA reportedly began as a sociology course project meant to fight social injustices in San Jose.

Bellanos opened the conference and passed the mic to Pastor Scott Wagers, an SJSU alum and a crusader for the homeless for nearly 30 years. Wagers said that he formed the first SHA in the ’90s as a student working towards his master’s degree and is happy that the organization is back and speaking up for the displaced.

The establishment of the HomeFirst Shelter on Little Orchard Street in San Jose can be tied directly to the founding of the alliance in 1992, the pastor said. He and several others brought the homeless and pitched tents outside City Hall, leading to his arrest and ultimately a conversation with the mayor about what could be done.

Now, the issue is even timelier than it was during Wagers’ time at the university, he said.

Bellanos confirmed that some of the 18 active members of SHA have experienced homelessness or have had a hard time accommodating to a lack of affordable housing surrounding the school.

Cesar Herrera is an SHA member and has personally requested help in trying to finance his housing through the university. Herrera was told that he should max out his student loans in order to get by.

Bellanos said that this “solution” causes huge problems for students in the future, as they have debt before even entering the working world, which leaves them susceptible to homelessness.

Bellanos said that all of the comments that have been received from the community about the organization’s efforts to advocate for the homeless have been positive, despite not getting any concrete answer from the school.

The group said in a statement:

“President Papazian prides herself on being a president who places the well-being of her students at the center of her decisions … SHA encourages her to live up to her own standard and extend those caring decisions to our students whose basic needs are not being met.”

Wagers said that the SHA calling Papazian out specifically is a great strategy because it forces the university to take a stance.

“It’s right out of the Martin Luther King Jr. handbook.”

Bellanos said that she does believe the school tries to provide resources to students facing homelessness, but it’s not enough. The SHA looks to work alongside the university, not against it, but they are now waiting to see if their demands will be heard.

“We want a seat at the table, every single time the administration talks about homelessness among students and housing instability, we want to be there.”

Representatives of SJSU’s Office of the President were not immediately available to comment. 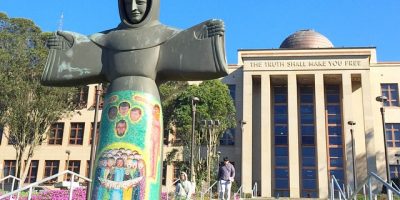