Authorities are looking for a man who escaped his handcuffs and fled in a San Jose police vehicle after being detained by officers who found him in a stolen big-rig early Tuesday morning.

San Jose police officers responded at 5:23 a.m. to a suspicious vehicle in the first block of Holger Way. The person who reported the vehicle said the GPS system in the truck showed it was stationary in that location, police spokesman Sgt. Enrique Garcia said.

The officers found 40-year-old Andrew Trujillo in the truck’s cab and took him into custody. They placed him in handcuffs in the back caged area of a patrol car and continued their investigation, Garcia said.

Somehow, Trujillo escaped from the back of the car and drove away in it. Officers found the stolen police car later this morning in the 23000 block of Clawiter Road in Hayward and the police weapons in the vehicle were accounted for, according to Garcia.

Trujillo remains at large. Police released a photo of him and described him as a Hispanic man who is about 5 feet 11 inches tall, weighs about 215 pounds, has black hair, brown eyes, and was wearing an orange Campbell Towing shirt with reflective stripes, blue jeans and gray shoes. 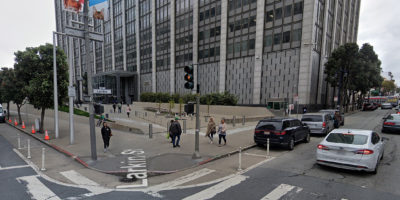 At least one person was seriously injured when they were run over by a paving machine at a work site...