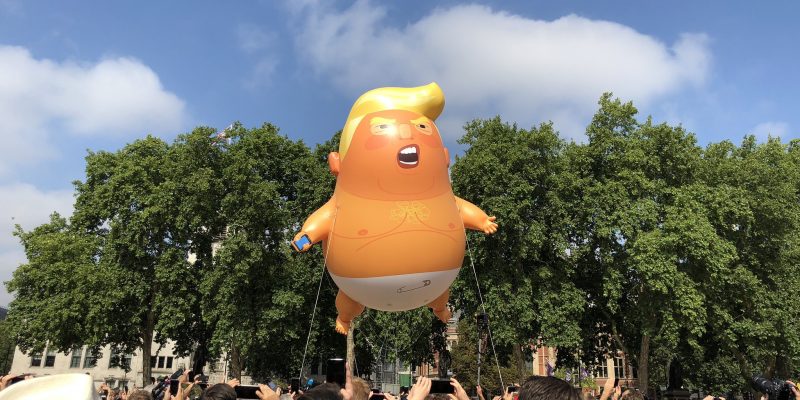 With President Donald Trump in the Bay Area on Tuesday for the first time since being inaugurated, several dozen protesters have gathered in Portola Valley to call for his impeachment.

Trump arrived late Tuesday morning at Moffett Field to attend a re-election fundraiser luncheon at a location that hasn’t been released. Protesters with activist groups like the Backbone Campaign and Raging Grannies went alongside a road in Portola Valley with colorful inflated balloon versions of Trump to look like a baby and a chicken. The activists also were handing out stickers calling for Trump’s impeachment.

Ruth Robertson, a Palo Alto resident and part of the Raging Grannies, said:

“We don’t want Trump in our town.”

Toni Norton, a Santa Cruz resident, was also among the protesters and said she feared for the future for her grandchildren, calling Trump a “wannabe dictator.”

Tickets for the fundraising luncheon with Trump cost as much as $100,000. Following his brief visit to the Bay Area, he is expected to travel to Southern California later Tuesday, according to the White House.