Sorry to get your hopes up, but it’s not Timmy or Cain.

The Giants have rewarded resurgent journeyman Ryan Vogelsong by giving him a two-year contract plus an option for 2014. Mychael Urban broke the story on Twitter and was able to get Giants general manager Brian Sabean to confirm the deal.

Vogelsong was arbitration-eligible for 2012, so this wasn’t a time-sensitive deal. It’s still a good move by the Giants. Vogey had by far the best season of his career in 2011, racking up 13 wins and compiling a sparkling 2.71 ERA in his first season in the majors since 2006.

The first report of the financials of the deal have it worth $8 million over the two years. That’s a very reasonable deal for a No. 4 starter considering the Giants’ No. 5 starter — ahem, Zito — will make $39 million during the same timeframe.

With Vogelsong comfortably in the fold, the Giants can narrow their focus on Lincecum and Cain. Giants fans love Vogelsong and are happy he got his pay day, but they won’t rest easy until the two aces are squared away. 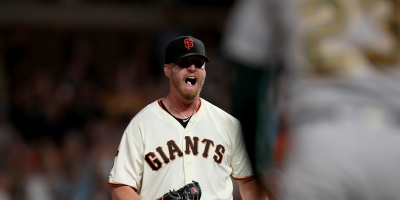 Giants closer Will Smith should be throwing by the weekend

Could you imagine going to your bank’s ATM and withdrawing a few fresh photocopies of $20 bills? This guy thought...