As storm clouds threatened the Bay Area on Sunday, crowds of people huddled around the photographs of SFMOMA’s new Photography in Mexico exhibit and discussed images from the likes of Graciela Iturbide, Enrique Metinides and Edward Weston.

The images in the exhibit range from the stereotypes many viewers expect, such as child laborers and indigenous peoples, to images documenting the complex contemporary issues of unchecked urban growth and immigration.

A stunning image in the exhibit by Elsa Medina (also featured on NPR’s The Picture Show) depicts five men on a hill carrying jugs of water and little else facing the United States from Baja California. Without context, viewers will immediately understand the men are on an arduous journey and the light they are facing signifies hope as well as the journey’s end.

Several images of note from Alejandro Cartagena depict rows and rows of mass produced yet brightly painted concrete blocks that serve as homes to millions of people in so many of Mexico’s suburban areas.

Cartagena spoke movingly about his photographs at an SFMOMA panel discussion and explained that, for many people, the tiny homes offered a first chance at owning property. Their distance from urban centers, though, was clearly a factor that hobbled economic growth in such areas.

To those interested in beautiful, interesting and anti-stereotypical images of Mexico, I highly recommend a visit to the bilingual exhibit.

In the words of Assistant curator of photography Jessica McDonald:

“Instead of just thinking about picturesque landscapes and pictures of villagers and stereotypical images of Mexico, this [exhibition] shows that it’s a much more complicated situation.” 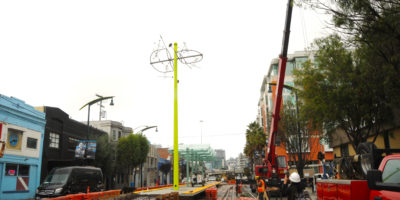