LOS ANGELES – As San Francisco fans show off their orange glow with the Giants up 3-0 over the Detroit Tigers in the World Series, wonder if rival fans in LA are feeling blue?

Dodgers fans’ team spirit definitely took a dip this season, as the Giants prevented their team from winning the wild card, won the division, and made their second World Series appearance in three years.

Could this make Los Angeles green with envy?

No baseball jerseys were in sight at ESPN Zone at L.A. Live during the Giants game Thursday night. But fans of the sport were watching, and some — true to blue —  secretly loathing.

Dodgers fan Zak Glosserman, 23, born and raised in LA, shared his feelings about the World Series with SFBay while watching at the bar:

“I hate it. I’ve always hated the Giants. I know they’re a good team but I don’t think they deserve it. I hope they lose more than any other team in baseball.”

Passion-charged comments like that rain down regularly from the Bay during baseball season, but Southern California sports fans might be surprised by Glosserman’s snap back up north. Glosserman himself explained the dichotomy:

“Generally, sports fans from NorCal are bigger haters on LA than we are on their teams. Everybody loves to hate from there because we’ve always had better teams. I don’t know, they’re all haters up north.”

To understand Glosserman’s seemingly hypocritical contempt toward the Giants’ success, SFBay asked USC Annenberg School for Communication & Journalism professor who has taught the course “Sports, Business and Media in Today’s Society” since 1999 to weigh in.

Professor Jeff Fellenzer — and his three decades of experience in the sports and media businesses, both up north and down south — said that the Giants-Dodgers rivalry is an exception to the otherwise NorCal hate-SoCal “don’t care” attitude. And he says it has a lot more behind it than just sports:

“There’s a natural division between northern and southern California. They’re very distinct areas and the teams represent those areas, represent the passion of fans. So I think games themselves become an extension of the rivalry between NorCal and SoCal.”

Even in conversations not relating to sports, it’s common to hear the SoCal person complaining that NorCal is too cold for living, and the NorCal person calling SoCal “pretentious” and “Hollywood.” Is there an equal amount of hate going in each direction?

Not quite, according to Fellenzer who even agrees with Glosserman on the reason:

“I always feel that the hatred, jealousy is much more noticeable up there toward teams down here than here towards teams up north. It’s not the same intensity in feeling. And I think it’s primarily because we’ve been so successful – Dodgers more than the Giants, Lakers more than the Warriors, Rams more than the 49ers and the Kings won the Stanley Cup last year even though the Sharks have been contenders more often.”

But a group of Giants fans watching the game at the other end of the bar at L.A. Live had something different to say.

Jeff Gallegos, 42, born and raised in South San Francisco but a LA resident for the last 15 years, told SFBay:

“I think it’s equal because I have a lot of friends that are Dodgers fans who gave me a lot of shit for being a Giants fan. It seems that Dodgers fans are all talk but a lot of them don’t go to the games.”

“The Dodgers had a chance in the playoffs and half of the stadium was empty even when they were in contention. That being said, Dodgers fans beat up a Giants fan and put him in the hospital.”

Bryan Stow, by the way, has progressed since spending months at a LA hospital in a coma from the brutal beating in March 2011. He attended Game 2 at AT&T Park on Thursday as a guest of the team.

Even Dodgers fan David Perez, 28, sitting at a table wearing a Lakers shirt and hat for the basketball preseason game that same night, felt that Dodgers fans are far from not caring about the Giants’ success:

“Most of the Dodgers fans I know have been the biggest Tigers fans and would rather see anybody else win other than the Giants.”

The baseball rivalry dates back to the New York Giants and Brooklyn Dodgers days. Both teams came across stadium issues, and Dodgers owner Walter O’Malley dissuaded Giants owner Horace Stoneham from moving to Minneapolis and instead to the Golden State instead after the 1957 season.

“I kid with Giants fans that they have a team there because of the Dodgers.”

The moment the Giants triumphed over the Tigers, Fields and Gallegos clapped without restraint. No one else at the bar and restaurant cheered or booed.

“We were the only ones clapping.”

At a table with Perez, Liviana Morales, 22, born and raised a Dodgers fan in LA, admitted she wasn’t pleased with the Giants win:

“I’m not gonna lie, it’s hard to swallow that we lost in the wild card. But it’s baseball – no matter who’s playing in the World Series, you want to watch. And that’s the kind of talent you can’t hate on.”

Back at the bar, Glosserman took the Giants victory like a pretty good sport:

“I’m upset to say the least. At the end of the day I know the Giants are going to win. But I really fucking hate it. I’ll sit there and sigh and hope that the Dodgers are better next year.”

The Giants’ recent success does seem to be cracking SoCal’s “no-care” attitude toward NorCal at least a bit. If the Giants win the World Series, Fellenzer said:

“that will just fan the flames of the rivalry, no question.”

“It will intensify the rivalry from the Southern California point of view, so beating the Giants will be a bigger deal in the future and I’m sure I’ll feel that next time I go to a Dodgers game and the Giants are here.”

In the meantime, both NorCal and SoCal fans won’t go hungry thanks to the Giants’ Angel Pagan, who stole a base and scored free Taco Bell Doritos Locos Tacos this Tuesday for everyone.

Dodgers fans included, if they can stomach it. 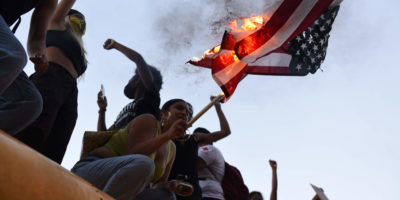 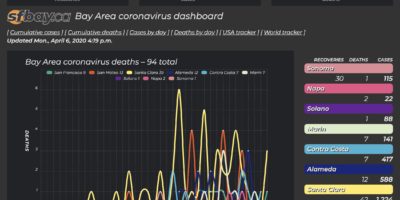 Ryan Vogelsong pitched the visiting Giants to within one win of their second World Series title in three years.