A San Francisco Superior Court judge has ordered a man to stand trial for vehicular manslaughter for allegedly running over and killing an elderly man with his bicycle.

Chris Bucchere, 36, is accused of striking Sutchi Hui, 71, with his bicycle at Market and Castro streets a year ago this month. Hui died from his injuries a few days after the incident.

Bucchere’s attorneys were hoping the judge would lower the felony charge to a misdemeanor. Bucchere left the courtroom with tears in his eyes after the judge ordered he go to trial.

Witnesses testified in Thursday’s preliminary hearing that Bucchere was riding recklessly and was not stopping for red lights and stop signs. Despite the defense’s argument that bicyclists have the right of way, District Attorney George Gascon said there is evidence of negligence.

This unusual case has the potential to set a precedent that puts bicycles on par with cars and other motorized vehicles. Golden Gate University law professor Peter Keane told KGO-TV:

“Probably if you looked at this case 20 years ago or even 10 years ago, it would have been unlikely that the prosecution would have been thinking in terms of manslaughter. But the whole aspect of bicycles, and the safety of bicycles in an urban environment, is so important now.”

“I don’t know, it’s tough to say whether he should be charged with manslaughter or not. I can’t say whether that’s right or wrong.”

The victim’s niece told KGO-TV that the family was happy the case is going to trial. 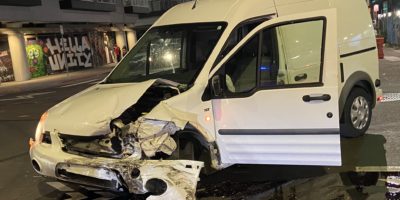 Police arrest man suspected of setting fire to his own vehicle, carjacking another

Before Thursday's trade deadline, the Bulls announced they had acquired forward Nick Walsh from the Gwinnett Gladiators.