These aren’t the cellar-dwelling Padres of yesteryear, but Jesse Chavez sure made them look like they were.

Chavez lit up the Coliseum scoreboard once again Wednesday, striking out 11 over seven innings for his third win of the season as the A’s assaulted San Diego 16-2, without mercy or regret.

Every A’s player either scored a run or knocked one in. Leadoff hitter Billy Burns scored three times, as did utility man Ben Zobrist, who also knocked in three runs.

Billy Butler, who has been looking for rejuvenation, added three more RBI, and so the story goes. Everyone contributed, nobody got left out, and Padres shortstop Alexei Amarista even took the mound in the eighth inning because the A’s wouldn’t stop pouring it on.

What’s more, the A’s didn’t even need the 11 runs they scored from the seventh inning on, because Chavez was just too dominant.

The A’s rode the start to their 29th win of the season, though the walloping win hasn’t been par for the course when Chavez dazzles.

His year has been similar to his career in baseball. When he shuts down the opposition, he doesn’t get the run support. And in the rare occurrence where his night doesn’t go as planned, well, it’s even tougher.

Chavez’s career started in Victorville, Calif., a small town in the Mojave Desert with little to do and even less to see. He played his high school ball in Fontana, a 40-mile drive south, through the winding mountain roads of his home area, and into the more hospitable parts of East Los Angeles County.

Chavez was drafted in the 42nd round of the 2002 amateur draft, by the Rangers, and went on to fulfill a troubled and disappointing career.

He hadn’t yet smelled major league grass by the time he was traded to the Pirates in 2006, but saw his first big league action towards the end of 2008.

But that didn’t go well. In his second career appearance, Chavez allowed two runs in under two innings. His three that followed, all one inning or less, came with one earned run.

By the end of 2009, the Pirates didn’t see much upside, and dealt him to Tampa Bay three days into November. By mid-December, Chavez had been traded again.

This time, though, he was moved for someone valuable. Rafael Soriano was the counter-balance, and for a period, his value was going up. That career growth was stunted, though, when the Braves waived him.

Chavez wouldn’t see another big league contract until the A’s let him roll in their farm system, starting in 2012, and ending with his 2014 introduction to their burly starting rotation.

He didn’t disappoint during the first half, finishing June with a 2.94 ERA and six wins. But he was moved to the bullpen with the additions of Jason Hammel and Jeff Samardzija, the two coming to Oakland via a fourth of July blockbuster trade that included two of the A’s best prospects.

Oakland brought in Jon Lester later in the month, putting the end to any real hopes that Chavez would move back into the rotation.

The 2015 season opened with Chavez coming nearly full circle, starting for Oakland with a 2.52 ERA into June.

“This was the best changeup we’ve ever seen him throw. And he threw a bunch of them tonight. (Stephen) Vogt was calling them early on, and it was working for him. Now hit throwing a bunch of them to right-handers, too.”

Chavez agrees. Melvin credited the off-speed pitches for the continued success of the others, and joked that Chavez would probably like to have some of the late runs in his back pocket for future use.

What may seem odd to some, but not to those who know Chavez and his style, he wasn’t up in arms, cheering on the added runs. Melvin, at some points, didn’t even know where he was.

Even during the postgame media session, Chavez wasn’t cheering. Wasn’t going crazy with excitement. He just took a long shower, and relaxed the best way he could. His soft-spoken demeanor carried on through a brief media session and into the night.

Nothing new to say. Just that he wants to win. No matter how the guys around him play, he’s going to remain true to himself. True to his own form. And true to what’s worked since entering the A’s rotation last year.

Oakland’s starting pitchers are 4-1 with a 1.46 ERA over the last seven games, and are 12-6 with a 1.97 ERA over the last 24. The staff has a 3.04 ERA for the season. … Jesse Chavez boasts a 2.75 ERA as a starter this season, with 22 earned runs in 72 innings pitched, and 10 total starting appearances. … The A’s are 6-4 in their last 10, and have won four straight, tying their season-high win streak. Oakland has also scored 43 runs in their last six games — three at the Los Angeles Angels, two at San Diego, and one at home versus San Diego. 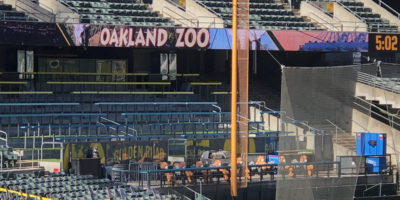 BART is expecting huge crowds on Friday before and after the Golden State Warriors' victory parade in Oakland.