The San Francisco Chronicle — owned by the $9 billion Hearst Corp., headquartered in New York City — last week announced a $15,000 crowdfunding initiative via Beacon to help pay for a Chronicle story about workers’ visas and immigration.

Once the realm of nascent startups with grand ideas and meager budgets, crowdfunding has exploded from $2.7 billion in 2012 to a forecast $34 billion in 2015.

In an industry starving for fresh business models and revenue streams, it’s no surprise media Goliaths like Hearst, Tribune and HuffPo are clawing for the crowdfunding teat.

Let’s be clear: A $9 billion corporation with its hand out crowdfunding $15,000 is like Donald Trump panhandling at Fifth and Mission from the window of his limo.

Crowdfunding isn’t cute, clever, or what cool kids are doing. For groups who truly need the money, like community journalism organizations, crowdfunding is often a means of survival and the only way to fund a project — or even operations.

And Beacon’s one-to-one fund matching for projects by media companies with multi-billion-dollar balance sheets kicks a double dose of dirt in the hardworking faces of independent journalists and community journalism organizations.

First, projects from behemoth organizations compete for limited crowd-funded dollars against independent and community journalists. Second, Beacon raises matching funds from individuals, companies and foundations who may have little or nothing left over to help support local, independent or nonprofit media.

The Chronicle cannonballing into this sadly shallow pool of funding drenches with disrespect the many earnest and grossly underpaid local journalism organizations that bring you stories and storylines that change our region.

But the Chronicle thumbing its nose at community journalism is hardly news.

Hearst’s flagship newspaper has mistreated, ignored or disrespected community journalism for years, often as the same hardscrabble news organizations — with fractions of pennies of Hearst’s budget — run circles around them.

After publishing a project in May largely duplicating an award-winning school segregation package produced in January by the San Francisco Public Press, Chronicle Editor in Chief Audrey Cooper said she had never seen the Public Press work or their similar distinctive graphics, despite appearing months earlier and receiving nationwide play from the Washington Post and elsewhere for a story everyone seems to agree was in the works at the time at the Chronicle.

And after storming into the Mission for their ambitiously myopic A Changing Mission package, the Chronicle asked El Tecolote to translate Chronicle stories into Spanish — for free. The nerve of a $9 billion corporation asking editors at a community-based nonprofit newspaper like El Tecolote to work without pay is difficult to fathom and impossible to justify.

Nonprofits like the San Francisco Public Press, El Tecolote, Central City Extra and others earn every penny of your support, and need much more. Perhaps Oakland Local and the Bay Citizen would still be here had they received more of it.

And “for-profit” journalism organizations of modest means and budget — like my amazing team of dedicated journalists here at SFBay — pound pennies into copper leaf to bring you award-winning Bay Area news and sports coverage. (Which we thank you for supporting via advertising and other revenue-generating activities.)

A sad fact precipitates Hearst’s decision: There is simply no business model for important, serious journalism on the scale required to keep our institutions honest and our world illuminated.

One model is to assign reasonable amounts of “record revenue and profits” from “Best Sex Ever”-caliber publications like Cosmo and Seventeen or bereft “reality” television toward serious journalism within your newspaper portfolio.

Unless, of course, you can dupe your audience into helping pay for it. Again.

Jesse Garnier is editor and publisher of SFBay.ca and an assistant professor of Journalism at San Francisco State University. He was online editor and Editor of the Hearst-owned Examiner.com from 1998 to 2000. 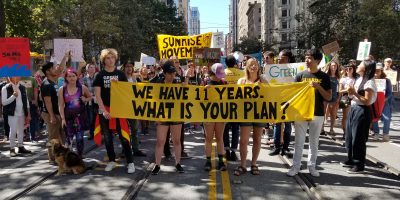 Disaster response teams with the Society for the Prevention of Cruelty to Animals have been rescuing animals from the Tassajara...