The A’s farm system is weak.

Ranked 17th by Baseball Prospectus, 18th by SBNation, 19th in MiLB.com’s ranks and 18th by Baseball America. Those were the preseason pigeonholes, and nobody in Oakland’s farm has shown up the way some expected.

Which is why general manager David Forst needs to make some big moves this trade season, and even if the A’s fancy themselves as contenders — a possibility with the way they’ve played since the break.

Forst should take some of his talent and parlay it for extreme talent. No more numbers games. Even if they make mathematical sense.

The A’s need bold moves during this year’s trade deadline. That means moving controllable players like Danny Valencia and Marcus Semien, Sonny Gray and Stephen Vogt, and definitely those set to be free agents like Josh Reddick and Coco Crisp.

A complete sell off is in order. And it’s the only way the A’s can compete given their team issued fiscal constraints.

They have a solid core of young arms with pretty decent to high ceilings — Sean Manaea is a flamethrower, Daniel Mengden seems like a legitimate number three, and Kendall Graveman could be the best back of the rotation starter in the majors now that he’s figured out how to remain consistent.

Their outfield are known defensive liabilites, save for Reddick, and players from opposing teams have even mentioned the weak arms in left field and center field when asked why they attempted an extra base this season. Khris Davis, though a solid power hitter, can’t throw further than a decent pee wee player, and Crisp can only do a little better.

Other teams, meanwhile, have near-elite hitting prospects who project to be average or better defensively.

Take the Pirates’ Austin Meadows for instance, the second best outfield prospect in the game according to MLB.com, who would be far and away the best player in an A’s farm or major league roster.

Or Red Sox outfielder Andrew Benintendi, who will have a tough time advancing to Boston, given the logjam of young talent who call Fenway home.

Ian Happ of the Cubs, and Yoan Moncada of the Red Sox — a team with so much organizational depth that it’s hard to fathom a scenario where they would label any player as untouchable — would both be gems to have in the middle of the infield.

The A’s top prospect, according to every media evaluation out there, is Franklin Barreto, and this young man doesn’t even crack the top five shortstop prospects per MLB.com.

The A’s only have two players ranked in the top five at any one position: first baseman Matt Olson and third baseman Matt Chapman. And that’s only because of the darth of talent at the corners, not because Oakland possesses top-flight players.

The A’s should consider keeping the two, though, but only that pair. Everyone else should be used to upgrade the barren wastelands of Nashville and Midland. That includes Barreto, especially if the A’s do keep a tight hold of Semien.

Why? In a nutshell:

Oakland doesn’t figure to spend over $100 million on their major league roster so long as Lewis Wolff is the majority owner, and frankly, Billy Beane doesn’t have much incentive to spend either, given his partial ownership. That precludes the A’s from signing any notable free agent, nor does it help the odds of retaining their own talent.

But by adding some high level talent at the AAA level now, the A’s could have a roster that is controllable for five or six-year, while only spending $500 thousand per young player until arbitration kicks in, and then still only a fraction of what that player would be worth on the open market.

There will be growing pains there. That is not debatable, though it isn’t necessarily bad.

More importantly, it would at least satisfy the majority of knowledgeable fans — an oxymoron in most instances — that the A’s truly are committed to winning ballgames. Sure, the outcry would be loud.

“How could they trade Barreto?” would be shouted in agony from rooftops, and “Fire Beane!” banners hung from the right field bleachers.

But a fans’ disgust would slowly grow to interest, and ultimately optimism.

Who, specifically, should the A’s target, and with legitimate chances of obtaining? Here’s a positional breakdown, which excludes first and third base (though Joey Gallo of the Rangers would be an excellent acquisition):

Not all of these players are attainable together, there needs to be some give and take. But Contreras is blocked by Kyle Schwarber in Chicago, with Meadows, Benintendi, and Alvarez.

The three project as high impact players, and Alvarez in particular could be the biggest coup despite having the least bit of name recognition.

The Dodgers also have a laundry list of needs, specifically outfield help and rotational depth, while the Red Sox need a catcher and bullpen depth. The Pirates could use help everywhere except for the outfield, and the Braves could see it wise to add some veteran help as they call up each one of their many talented minor leaguers.

Will the A’s do it? Maybe — they’ve displayed a tenacious attitude at time in the trade market, and are likely fed up with feeding off scraps.

Moreover, Oakland has been among the most aggressive teams over the last 15 years in the trade market, and though they’ve been on the losing end of most deals recently, history alludes to the fact that Forst and Beane will win on some deals soon enough.

The A’s brain trust needs to turn things around, be an angry bull to a foolish matador, and pull off some deals that can not only right the ship initially, but also keep the team relevant for several year.

But the A’s have shown a propensity to master overthrowing the odds, do the impossible, and zig when everyone expects them to zag. Which is why nobody should count them out. Yet.

Vimael Machin honors Roberto Clemente by wearing No. 21 for Oakland 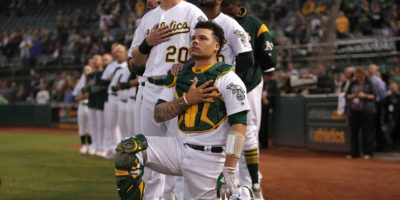 A federal judge in San Francisco gave preliminary approval Tuesday to a $14.7 billion settlement with automaker Volkswagen in a...