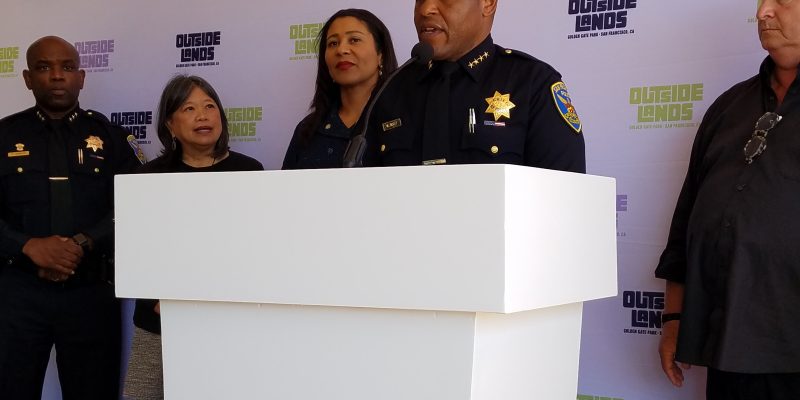 San Francisco Police Chief Bill Scott, center, spoke to the press about security at this year's Outside Lands at a press conference in San Francisco, Calif., on Thursday, August 8, 2019.

San Francisco police officials say they are prepared to oversee the more than 200,000 concertgoers who attend the three-day Outside Lands event at Golden Gate Park.

Many people are concerned in the wake of recent mass shootings at the Gilroy Garlic Festival, in El Paso, Texas and in Dayton, Ohio.

Mayor London Breed said she wants the public to know that city officials are ready with a robust security plan for the festival:

“We want the public to know that we stand prepared with the security plan to address what we know are fears of some of the people who plan to attend this concert might have.”

Scott said the public will see officers on bikes, motorcycles, horses, on foot inside and outside of the event area.

The police chief also stressed that there will be officers around the perimeter event — an important part of the security plan as the shooter in Gilroy reportedly entered the Garlic Festival by cutting through a fence.

Scott suggested attendees visit the Outside Lands website to be aware of what is and what is not permitted, including the types of bags people can bring in.

Meanwhile, city officials encourage the public to take public transit to the event. The San Francisco Municipal Transportation Agency said they will run additional service on the 5R-Fulton, N-Judah and an additional express bus service during each night of the event. More information can be found on the SFMTA website.

Outside Lands will also be the first festival in the state to allow the sale and consumption of cannabis in an area called Grass Lands, officials said. The festival was granted a permit by state and city earlier this week.

“If it works well, we might do this for other festivals. If it doesn’t, then we’re going to have second thoughts of issuing permits like this in the future.”

California to phase out gas-powered passenger vehicle sales by 2035

A shelter-in-place order has been issued for San Jose State University Thursday evening because of a possible gunman on campus,...