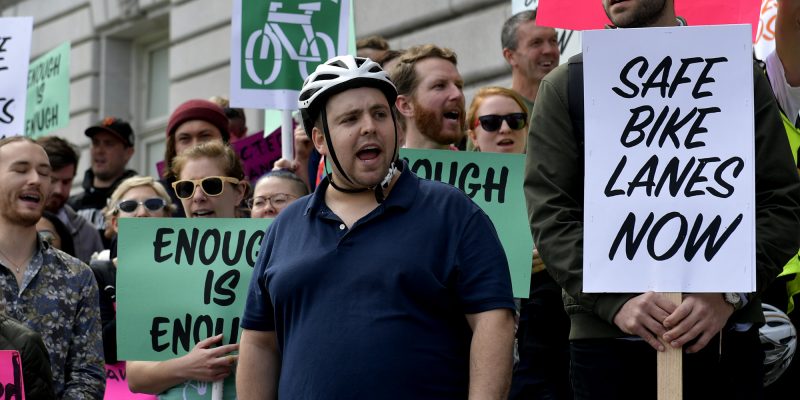 Gov. Gavin Newsom over the weekend vetoed a bill that would have required the state’s Department of Transportation (Caltrans) to prioritize bike and safety improvements when making capital infrastructure improvements on its state highways.

“This is a troubling signal that Caltrans under Governor Newsom will continue to prioritize speeding traffic over the safety of people walking and biking while failing to curb greenhouse gas emissions from cars and trucks.”

“Right now, there are several deadly streets in San Francisco that SFMTA cannot fix because they are considered highways and therefore under the purview of Caltrans. This bill would have helped hold Caltrans accountable for improving these deadly streets for people walking and biking. San Francisco needs every tool and policy possible right now to make our streets as safe as they should be, so we hope that some version of this bill can be passed in the future.”

Wiener’s bill would have affected streets like 19th Avenue, also known as Highway 1. Several intersections on the 19th Avenue corridor are on The City’s High-Injury Network Map, where 75 percent of traffic collisions occur on just 13 percent of city streets.

The senator issued a statement emphasizing the dangers of state highways that run through local streets.

“The veto validates Caltrans’ failure to make these streets safer and assumes that Caltrans will voluntarily act, when it has failed to do so for many years. Our streets are for everyone — including pedestrians, cyclists, and bus riders — and they should be designed for everyone. These streets are used by so many people, including children walking to school, seniors crossing the street to go shopping, and people riding their bikes.”

In his veto statement, Newsom wrote:

“I fully support improving facilities to increase walking, biking, and accessing public transit. However, this bill creates a prescriptive and costly approach to achieve these objectives.”

Wiener vows to continue working to move the state’s transportation policy out of the 1950s and into the 21st century.

September was a great month for California's labor market with the unemployment rate falling to a record low 4 percent,...